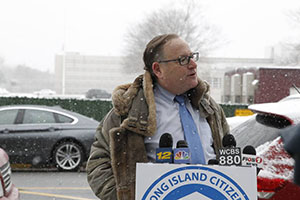 LI race yields what might be the greatest TV ad

October 24, 2016- Albany, NY – It’s still October, but we’re ready to call it: This year’s most memorable political ad comes from the campaign of Long Island Democrat Dean Hart, who is running against Republican Assemblyman Michael Montesano.

And then the commercial takes a one-way trip to Crazytown (or, if you prefer, the Village of Crazytown) by cutting to a shot of Hart standing in front of a waving flag superimposed with bursting fireworks as “The Stars and Stripes Forever” plays, with a badass-looking computer-generated eagle perched on his arm. It’s a shame Hart didn’t opt for a more patriotic theme, eh? (This reporter will admit to initially being fooled by the eagle — “Dude, you need a glove to hold an eagle like that!” was Matt Hamilton’s correct observation.)

“On election day, vote for Dean Hart for Assembly,” says the optometrist, pronouncing the name of the chamber as if it came with four syllables, “and no to continued corruption and cronyism that’s rampant in our party and in our town.” His purse-mouthed expression as the ad ends is worth the price of admission.

Hart’s campaign has been, well, unconventional in other ways: Earlier this month, the candidate said he was ready to spend up to $1 million for “a giant marble statue” of Long Island singer-songwriter Billy Joel in front of Nassau Coliseum. Hart has chided Montesano for failing (twice) to secure passage of a bill that would name a stretch of roadway after the pop star. (“My opponent is either impotent or is simply not trying, because everyone loves Bill Joel,” Hart said in a statement.)