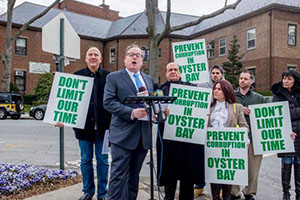 The Oyster Bay resident said in a press release Thursday that he would spend $1 million to build a marble statue of Joel outside the Nassau Veterans Memorial Coliseum in Long Island to commemorate the piano man’s awesomeness. The coliseum is scheduled to re-open next April with a performance by Joel, who is a Long Island native.

“Next to Teddy Roosevelt, Long Island really doesn’t have a more famous or popular person than Billy Joel,” Hart said in the release. “I can’t think of a better way to unite Long Islanders than by erecting this marbled monument before Billy opens up the new Coliseum in April.”

“My opponent is either impotent or is simply not trying, because everyone loves Bill Joel,” Hart said. “No wonder Albany is a mess, our representative can’t do something as simple as renaming a small portion of a road in Billy Joel’s backyard, where there’s near universal support.”

But the issue in Montesano’s case isn’t Montesano. It’s Hart’s fellow Democrats, who have reportedly stonewalled the proposal, as Montesano has made clear, according to Politico.

“The question for my opponent is, since he’s a Democrat, what’s he going to do to convince his colleagues and the chair of the Transportation Committee to let this bill pass?” he said. “Because that’s where the stumbling block is.”

Hart’s release can be found below. But the larger takeaway here is that this is the most Long Island story of all time.