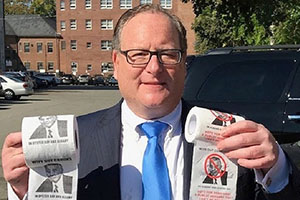 Hart will continue to call for the resignation of Oyster Bay Town Supervisor Venditto – hands out rolls of toilet paper with the message: “WIPE OUT CROOKS IN OYSTER BAY AND ALBANY.”

“Did Assemblyman Michael Montesano get lost on his way to the press conference where his fellow Republican State Senate buddies called for Nassau County Executive Ed Mangao and Oyster Bay Town Supervisor John Venditto to resign, or is he so mired in the cesspool of Oyster Bay corruption that he can’t move anywhere?” asked Oyster Bay Assembly Candidate Dean Hart of his opponent. “I think we should at least be able to agree that given the fiscal catastrophe that our county and town finds itself in, Town Supervisor Venditto is no longer in any type of position to be able to help our community.”

Hart has previously called for the resignation of Oyster Bay Supervisor Venditto because of his terrible fiscal management, as well as for his ties to indicted restaurateur Harendra Singh and convicted Oyster Bay Planning Commissioner Frederick Ippolito.

Hart will continue to make his case for Oyster Bay Town Supervisor Venditto to resign by continuing to hand out thousands of rolls of toilet paper to local residents that have a picture of Venditto on it, along with the message “WIPE OUT CROOKS IN OYSTER BAY AND ALBANY.”

« Photos LI race yields what might be the greatest TV ad »