Man Helped by Firefighters Wants to Help Right Back

This is a nice bit news in a sad situation. You may remember that two firefighters from Rescue 1 were hit by a cab on the Upper West Side on July 20, with John Walters (pictured, far left) pinned in between the cab and the fire truck while Mike Schunk (left) was thrown onto the sidewalk. Walters had his right leg amputated and Schunk will need a metal rod placed in his right leg. 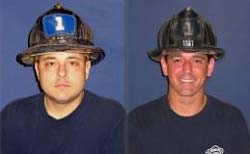 Earlier that day, they had helped Dean Hart who fainted and fell into the subway tracks at the 57th Street B/D/E subway station (another commuter, Sonia Delgado, actually pulled him off the tracks). Now Hart tells Newsday that he’s setting up scholarship funds for Walters’ and Schunk’s families. Hart says, “Without them I would be a smear on the rail. I’ll be fine. My arm and hand will heal. These guys will not be fine.”