Local optometrists and Woodbury Optical in Hicksville have partnered with the Moreano World Medical Mission to provide free eye care to underprivileged children in the Dominican Republic. 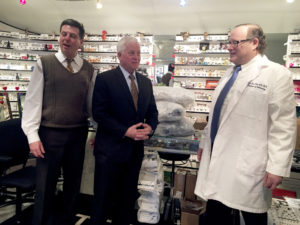 Dr. Dean Hart, of Woodbury Optical, in conjunction with his colleagues, has worked to collect thousands of eyeglasses and other materials to take with them on a trip to the island nation. “A pair of glasses can make the blind see. There’s a huge amount [of poor eyesight] that can be solved by giving them glasses,” said Hart.

This is Moreano’s 17th mission. The volunteer group is known for providing free reconstructive surgeries to children in Latin America. This is the first year Moreano has cooperated with optometrists to aid its mission.

“Dr. Edwin Moreano has been running this mission…but he never brought the eye care [professionals] with him because it’s specialized. He’s a plastic surgeon who can do all sorts of things,” said Hart. “We’re not exactly sure how many patients we’re going to see, because he has never done the optometry care before.”

Regardless of not knowing what to expect, Hart is excited to be part of this mission. He was even able to provide most of the eye care equipment that was being donated for the mission. 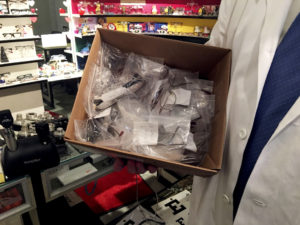 “Eye care has a lot of equipment and then you need to have thousands of glasses if you get a prescription,” said Hart. “There’s no place to fabricate glasses there. We have tons and tons of glasses for them.”

Assemblyman Charles Lavine said that he believes this mission is especially important.

“I’ve been a supporter of Dr. Moreano and his work for many years. I’ve also been in the Dominican Republic, but I wasn’t in La Vega, which is where these necessary services are going to be delivered and provided,” said Lavine. “I was in Cabarete in the north and the level of poverty was something that was difficult for me to experience.”

“The fact of the matter is that it’s a very small world,” he said. “The Dominican Republic is not that far from our country… We’ve got to make sure as Americans that we all take care of each other—whether it’s here at home or whether it’s in our neighboring countries. Health services that we take for granted here in the United States are not likely available in other parts of the world.”

Hart stated that if there are longterm issues with any of the patients he sees, he will try to work out a way to get them more care. 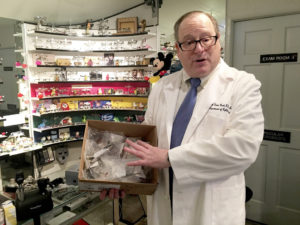 “Glaucoma patients will need eye drops for the rest of their life… I can give them a few samples, but what’s going to happen when they run out? There is no medical care for glaucoma,” said Hart. “I’ll bring the name and address home so maybe I can get one of the companies to ship down the medicine to them or maybe I’ll take another trip down there myself,” said Dr. Hart.

The team of volunteers that went on this mission with Hart left for the Dominican Republic on Feb. 15 and paid their own expenses for the trip.